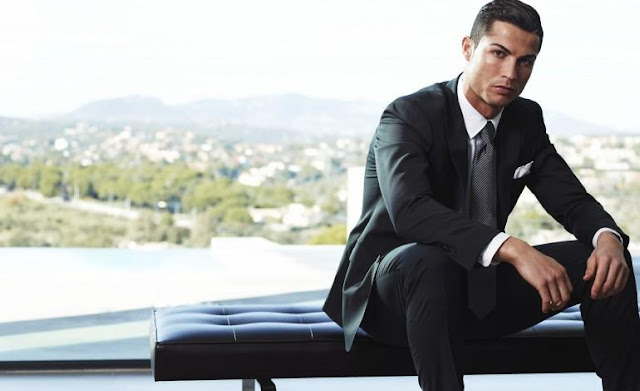 1. When Ronaldo was 12, his entire family moved 600 miles away Lisbon, the capital of Portugal. They wanted him to play for some of the national junior teams, which were located there. While they were Portuguese, their home of Madeira is actually is closer to Africa than the mainland of their own country, so they had their own unique accents and customs, making the move quite the culture shock.

When he was just 13 years old, Ronaldo was paid 1,500 Euros to join Sporting CP, a boy’s team based in Lisbon. When I was thirteen, I think I once got five dollars for mowing my parents’ lawn.

3. Bleeding HeartRonaldo personally flew to Indonesia to help the victims of the devastating 2004 tsunami after a photo circulated of a young Indonesian survivor wearing his jersey. He auctioned off much of his own sporting equipment to raise one billion rupiah for the victims, or a little over $75,000 USD. When interviewed about his involvement in so many charities, he replied, “I’m not going to change the world. You’re not going to change the world. But we can help—we can all help.”


4. Amateur ChefOne of his favorite hobbies is cooking. Though so much of his life is spent traveling, one of the first things he does when he finally gets a moment of rest at his house is make a home cooked meal.


5. DaddyRonaldo has been quoted multiple times saying that he thinks that having kids is one of the most rewarding things anyone can ever do. His first son is named Ronaldo Jr., though the boy’s birth mother is a total mystery. Some people say that she was a waitress he briefly dated, but many different theories exists. Allegedly, Ronaldo paid the birth mother ten million Euros to ensure that he was granted full custody of the boy, who is being raised by Ronaldo’s mother, Dolores, in Madrid. He refuses to tell the press the true story, and wants to wait until his son is old enough to consent to the public knowing what happened.


6. TragedyRonaldo’s father died when at age 52 due to health complications related to his alcoholism. While Ronaldo tried to pay for his dad to go into rehab multiple times, his pleas fell on deaf ears. As a result, Ronaldo refuses to drink at all, since he’s afraid the condition is hereditary and he doesn’t want to follow in his father’s sad footsteps.


7. All NaturalRonaldo refuses to get any tattoos because he donates blood on a regular basis. Having heart surgery at a young age helped him to realize how important it is for hospitals to receive these donations, and he encourages others to do the same.


8. Too Cool for SchoolWhen Ronaldo was 14 years old, a teacher at his new school made fun of his accent. It made him so angry, he threw a chair at the man, and it got him expelled from school. Instead of punishing him, Ronaldo’s mother told him that his real talent was in soccer, and that it was fine to not worry so much about school. From that point on, becoming a professional was Ronaldo’s only focus. Boy, sure is a good thing the soccer thing worked out.


9. A friend in needThis one is not really about Ronaldo -at least not directly, but without this fact, you might never have heard about him.
Ronaldo has accredited his success to Albert Fantrau. In his younger years, Albert was admitted to a football academy, however, he turned it down and Ronaldo was taken into the academy. When Ronaldo was asked Alfred why he refused the intake position, he simply responded, "You're better than me." The rest, as they say, is history.


10. Studied in the UniversityAcquiring university education is the epitome for most people. However, Ronaldo has surpassed that and is now being studied at a university in Canada.
Fourth-year sociology students at the University of British Columbia Okanagan study the life and career of Cristiano Ronaldo.


11. CR7 MuseumTurns out, having a course about you at a university isn't quite enough. Ronaldo has a museum in Funchal that is dedicated to his life, career, rare photos, trophies, and awards that he has won over the years. What a great way to be reminded you're the best than by a museum showcasing all your accomplishments.


12. Racing HeartWhen Cristiano Ronaldo was a teenager at just 15 years, he was diagnosed with a racing heart. The condition could have potentially led him to hang his boots for good. Luckily for him, the condition was repaired through laser surgery. Life must have dealt him a good hand as the surgery was successful, and in a few days, he had recovered and was fit to go back to the pitch for practice.


13. Jumping PowerTo be a great football player, there are certain things that you need to take into account. Aspects such as speed, flexibility, and jumping power. Cristiano Ronaldo jumps at 5G -for contextual purposes, G-force is the power it takes to jump, and Ronaldo shares his record with a cheetah. Yes, cheetah's too, jump at 5G. Hows that for impressive!